Michel Sicard is both a writer and an artist. His theoretical and poetic research is accompanied by substantial bodies of work in fine arts – drawings, paintings, photographs, artist’s books, objects – exhibited from the 1980s on. He has interwoven the notion of writing with that of artistic creation by inventing, in 1975, a minimalist practice he called écrivures. Ecrivures is a vocabulary of rhythmic keys, signs without letters, which intersect and overlap as transparent overlays. These signs-traces are lightweight, become immaterial, are based on gesture, speed and support. 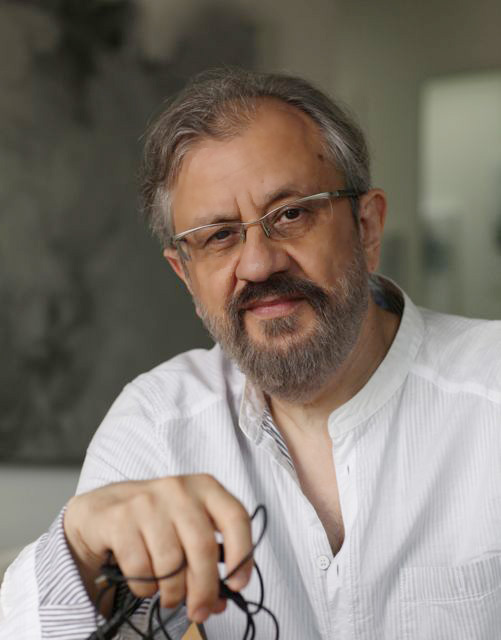 Following Écrivures, the series Aspersions shows that the splash and fluidity of acrylic paint, applied in successive layers, can reorient and change imperceptibly according to the body’s position. 1987 to 1990 marks the period Chromatics, where aligned marks or drippings are common practice. This period culminates in the series Chromos/speed where crushed material unfolds steadily, as a litany, using rice paper rolls or free-hanging sheets as surfaces.

The idea of working in “series” gradually takes root in his work, such as serialism in music. This concept deploy forms or marks, without preconceived ideas of the figure, and without hierarchical passages or plans, investing a space, and working the space in echoes, like clockwork. This serialism is not mechanical, but is based on its own body, which it seeks to address, such as a seismograph, scansion. In the gap between coding and corporality, a drift is born embodied by the work itself.

Recently, Michel Sicard’s art remains driven by an underlying semiological reflection, on rhythm, and on overflowing but discontinuous time. The artwork no longer seeks the image or the message, but only the trace of a passage, the difficult journey of a subject into a space. We witness the creation of a being which is always problematic, but nomadic. Whether in Paris, New York, Berlin, Marrakech, Seoul, Nanjing, Beijing, his creation is site- specific, applying itself to the territory at hand, the chaotic urban space. Created in conjunction with imagiels already in place (for instance, drawings on torn wall posters), objects gleaned in situ ; creation can also occur in collaboration with other artists, bringing into play a springing alteration, forming ties of time and pathways as in a palimpsest.

In this way, the work Michel Sicard exhibited in Berlin 1994-1996 captured the thrill of a city partially destroyed, but rising from the destruction in what could be considered a “critical reconstruction” (a term borrowed from the planners of Berlin, measuring one of its series). He says goodbye to postmodernism by the refusal of any nostalgia.

More recently, his work plays with astrophysical notions, the great outdoors, randomness and chaos. Against “the society of the spectacle”, he produces works of meditation, taking into account the notions of loss and erasure, entropy.

The key concepts of his work draw upon the act of writing, tracing , impression, separation, flux, energy, recovering/overlaying, palimpsest, erasure/disappearance, dissemination. These ideas link his work to Mojgan Moslehi. Since 2004, when on-site at the Seoul Arts Center, collaborating on a series of major papers, Michel Sicard and Mojgan Moslehi have regularly exhibited their works together, in juxtaposition and through joint creations.

Michel Sicard (b. 1950) currently lives and works in Paris. After studying Philosophy and Literature, and following the publication of texts of literary criticism (including the aesthetics of Sartre), he developed major bodies of artwork. Following a Working Artist Grant from the Ministry of Culture at the Villa Arson in Nice in 1984-1985 and The Fontenelle Award by the FRAC in Rouen, he has exhibited in many different countries worldwide, in both solo and group exhibitions, including London (ICA 1986), Rome (Villa Medici, 1987), New York (New York University, 1987), Brussels (Bibliotheca Wittockiana, 1992), Berlin (French Institute, 1994), Seoul (Seoul Arts Center, 2004) , Harbin (Normal, 2008 University), Nanjing (Museum of Modern Art, 2008), and Beijing (National Academy of Painting, 2010). In 1995 he passed an accreditation enabling him to direct research in Art and Language Arts, and since 1998 he has occupied a Chair in the Fine Arts Department of the University of Paris 1 Panthéon-Sorbonne. Many of his works can be found in public collections in France and abroad.