The work of the artist duo, Sicard & Moslehi, displays a plurality of forces and tensions as well as ultrasensitive energy which forms and propagates within physical spaces. These spaces are psychic, extending between mental and sidereal landscapes, and between the intimacy of deep undetermined matter and bodily imprint; represented by fractured, diluted portraits, cut-up clothing, which conjure up a proliferation of signs, passages, excavations, common threads that express an organic and metaphorical approach; these free-running energies transform all into networks.

The work of Michel Sicard and Mojgan Moslehi bring together immanent chills; they pass and disappear without leaving a trace; they create an uncertain space, an unpredictable onset and a brief life sequence. Tenuous and often intangible sensations linger; it is as if our “bubble of regeneration” has trouble rising to the surface; only a thrill is left, an underground resurgence of an inner movement, like blood pumping under the skin, detected only by seismograph.

Their designs trace infinite movements which suddenly occur at the edge of what is mental and visible – as if there was writing before the letter, infinitely more subtle and varied, sense before feeling. It is the ‘impromptu appearance between flow, keeping an amniotic speed and light, its rays pointing towards the sublime. 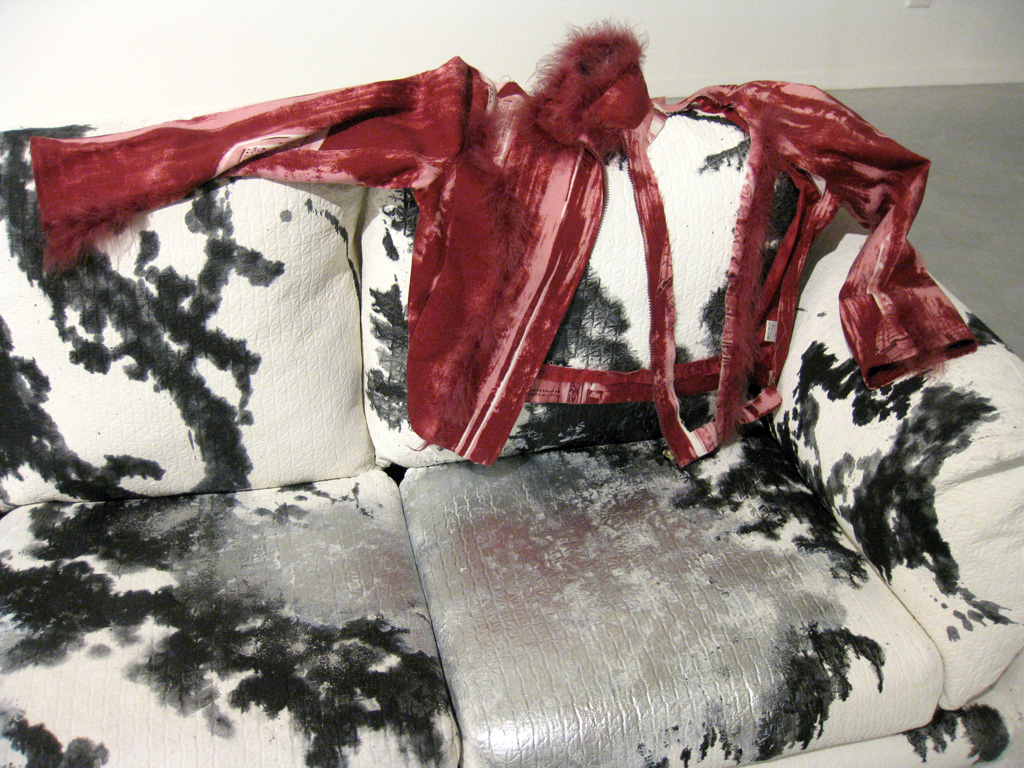 In this pictorial approach, dark matter draws from the depths of the unknown, to reach new horizons and discovers new opportunities to make that which is invisible, visible. It simultaneously emits a destructive energy supplying its density and representing the coming- into-being process; it maintains this continual appearing-disappearing interaction of the world as a whole, leading to a total collapse. As in the series of portraits that are lost in a halo of evanescent forms, they disappear and liquefy, until all contact with reality breaks.

Their approach consists of revealing the effectiveness of this insubstantial presence, which perpetuates itself in an in-between state, linking the virtual to the present day; it is a latent representation, between non-being and becoming, at the threshold of non-being, like a crack between space and time.

This void, this gap in space-time, continually regenerates within their vision, dematerializing the sensitive space of the work, one proceeds by reflective and shadowed means; the wave effect like fog, mist, or resonant fluctuation warp this moment, making it evanescent. The work is a translucent screen through which the world is reflected and enters into things. This fluctuating image, where undulating and floating movement wraps and empties into energy and regeneration of time, is the world participating into each projection of this fleeting moment; it considers the uniqueness of each thing, each particle, as a world of its own.

Their projects develop between what is real and sensible, between self and non-self; within this spectrum something occurs : an echo, a break-up, the visible emergence of invisible nothingness within a vibrant continuum, projecting its light expansion, its empty , timeless reflection; spatializes fleeting moments, illusory spaces are piled up and suspended; and fade from reflection to reveal another. They raise questions and turn upside down their thoughtful injunctions, their empty beats which unroll, layer by layer, from a deep dark living beyond inertia, until they attain a thrilling clarity, and forge one space into another. A crossing of absences while they earn their growth and efficiency.

In their photographic approach, the background object arises in the image, as a witness of its disappearance, its loss of reality, and its emptiness puts it into action, makes it mute in removing its space of resonance. The image repeats the object from a distance which is its reserve, not by obstructing it, but in leaving it empty.

This emptiness which reflects a fragment of reality, escapes from the reality imposed by the subject – this can be defined as discontinuity. It introduces discontinuity into continuity and propagates itself like wavelengths, transfiguring itself into illusory vision; it remains impossible to fixate on, it implicates us within its movement of propagation. Here the photographic work is illusory vision, imposing on the object intuitive representation , or even a denial of reality, which puts it at the height of the reversal of limits, the spell of possibilities from which it is established its strength of alteration.